The Ghost of Tillie Jean Cassaway
A realistic tale set in Appalachian hill country. 12-year old Willy and his sister dare to befriend a wild child of the woods--even though she is said to have drowned years ago. They take separate paths to discover the truth about her--just in time to prevent another tragedy. An Authors' Guild Backinprint edition.

From Indian Corn to Outer Space, WOMEN INVENT IN AMERICA
True to the author's bent, this non-fiction book starts with an original fairy tale. Otherwise, it presents real stories of fascinating women inventors from colonial days to outstanding scientists of present time. Co-authored with Fred M.B. Amram. Ideal for homeschoolers.

Musical Plays for Children to Perform

Cecelia and the Blue Mountain Boy
A young girl who loves to dance finds a fiddle-playing boy on magical Blue Mountain. An Appalachian fairy tale with traditional and original songs. Based on the novel by the same name.

Twiddelaxadaffy
A musical play on words, ideal for elementary or middle school productions. Six syllables become a word that has to find its meaning -- a hilarious exploration of language. Fun, jazzy songs and dances. Could complement a poetry or creative writing unit.

The Executioners
In this one-act play described as "Powerful," "Deeply moving,", Men and women with opposite feelings about the death penalty confront condemned persons and each other--and a medical technician confronts his own soul. "It makes you think." Especially suitable for death penalty focus groups. Feel free to downloadthe script.

The Parkersburg, WV Actor's Guild gave the premiere production of Cecelia in February, 1997, as part of their renewed Guild Builders Program. The play was presented in a beautifully restored old theater in the city. 50 children from the area took part in the production as stage hands, working on costumes, helping build the set, helping with publicity and as actors and assistant stage managers. It was a gorgeous, lively production performed twice one weekend for the enjoyment of the community. It was sponsored by the Camden-Clark Memorial Hospital.

"Cecelia runs away from her gloomy Appalachian town to find a place where people love to dance and make music as much as she does. What she finds is magical Blue Mountain and a fiddler boy. This beautiful, romantic fantasy has an eternal feel to it that places it outside of time...an attractive book which can be enjoyed by people of all ages who love music and gentle fantasy. - School Library Journal

"There are echoes of fairy tale themes here - the quest for the impossible - enchantment. Washington Post Book Review


"This beautifully written story causes that indefinable lifting of the heart that, once felt, inspires all readers to continue to read." Parents' Choice Review of Children's Literature

Are you interested in producing Cecelia and the Blue Mountain Boy? 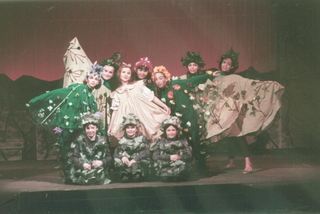 I wrote this play because the children's novel it is based on seems so perfect for a musical production. The theme of the story is the power of music. There are a few changes from the short children's novel, but basically, the play script follows the story as written. In the play, however, I bring alive rocks, trees and flowers.

I wrote all the songs, except for a few traditional
Appalachian fiddle tunes which are performed during the final festival scene. I wrote hymns following the pattern of ones I used to sing, or hear sung, in small back country churches in West Virginia. Other songs are more original, expressing the feeling needed for Cecelia, or the tone of the scene. Since the Parkersburg production, I have worked more on the music score with the help of David Boyer, a musician who has directed several musical plays. He has memories of roaming the hills of his own very real "Blue Mountain" country,

In order of appearance